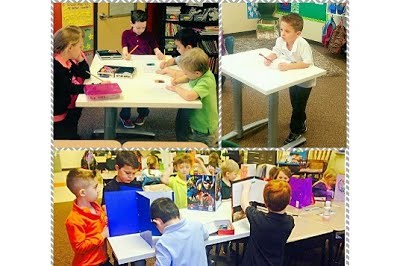 Standing desks have been gaining in popularity in the business sector for years, but until recently had been seen very little in the academic setting. The Stand Up Desks Initiative is the dream child of Imagine Kindergarten teacher Kristen Baker and Imagine parent Stacy Coats. Stacy's son was struggling in class and she approached Mrs. Baker with the idea of standing desks. As a Pilates instructor, Mrs. Baker frequently recommended the use of stand up desks to her adult clients. One day it occurred to her to look into research regarding the use of standing desks in the classroom. Her interest was piqued and she began to dig into the research. When Stacy approached her about the use of a standing desk for her son, it seemed to be a match that was meant to be.

In Mrs. Lerner's class, it is being observed that having multiple desks or workstations would be beneficial as so many kids are showing greater focus and productivity while standing. Ryan, a first grader, says, "Doing my work is a lot better when my back isn't hurting! This desk is awesome sauce!" In Mrs. Baker's kindergarten class, her decision-makers (students) have implemented their own rules for their multi-person workstation. The decision was made to be inclusive so all students get the opportunity to stand at it each day. Ms. Baker has noted that the kids who are standing are more focused, on task, and less disruptive than their sitting counterparts. It is also noted that the students are more content doing pen to paper work, given the choice to stand to complete the activity. Ms. Baker also says that it has made a huge difference on class behavior because kids are less fidgety and more settled! Logan, a kindergarten student, says that he “loves how it exercises his legs and he loves that standing up makes him healthy!” Jasper adds to that “sitting hurts me and standing lets me stretch and feel good!” Aubrey says that she loves standing up at it because it is “better than that hard chair.”
Stand Up Desk Initiative Update!
Monday, March 21st, was an exciting day at Imagine as seven stand up desks were delivered! These desks will be going to Ms. Penna, Ms. Jannamon, Ms. Lerner, Ms. Brigham, Ms. Wolfe, Ms. Magley, and Ms. Stallings! So far, every kindergarten class has a desk as well as one teacher from grades 1st through 4th! We only need 8 more to complete the elementary grades! Four more will get all first and second grades covered!

The Goal
Currently the goal is to raise $12,000 to purchase enough standing desks/workstations for at least one in every K-5 classroom and the Technology Lab. Ultimately, they would like to raise enough so that every classroom at Imagine can provide the standing desk option to students. Each desk/workstation costs around $450-$500.

Fundraising Efforts
.
How You Can Get Involved
In the Media